UBIT Briefing on the Hill 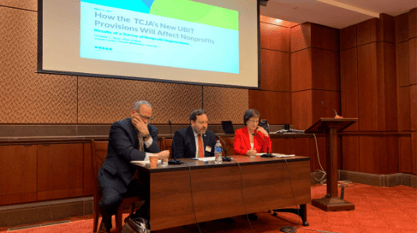 Last Thursday, the Council on Foundations and Independent Sector (IS) held a briefing on the Hill to discuss the findings of a report commissioned by IS about the effects the Unrelated Business Income Tax (UBIT) provisions have on the nonprofit sector. These provisions were enacted in the Tax Cuts and Jobs Act of 2017. For this filing season, nonprofits must pay 21% tax on fringe and parking benefits, and calculate each unrelated business income stream of revenue and related losses separately. This process will divert thousands of dollars from nonprofits’ missions and impose administrative burdens on their staff.

The panelists for the briefing included Elizabeth Boris, a fellow at the Urban Institute’s Center on Nonprofits and Philanthropy, who spoke in detail about the research; Scott Dodson, director of advancement and patron communications at the Richmond Symphony in Virginia; and Stuart Comstock-Gay, president & CEO of the Delaware Community Foundation. Both Scott and Stuart explained the negative effects these provisions are having on their organizations.

Scott stated that the transportation tax provision would cost the symphony an additional $25,000-$30,000 in federal taxes this year. “That’s an entire education program,” he said. Stuart asserted that nonprofit organizations should focus their time and resources in developing programs to further their mission, not in paying more taxes.

Related to efforts of repealing the UBIT transportation provision, the Council on Foundations and a broader coalition of nonprofits led by the American Society of Association Executives have been working to craft a sign-on letter to the tax committee leaders that makes the case for repeal of tax code Section 512(a)(7). This letter concludes with: “the undersigned organizations urge you to take action immediately to fully repeal this undue and burdensome UBIT on tax-exempts.” The goal is to get as many nonprofits as possible to sign on as quickly as possible. The initial list of signers includes the Council of Foundations, the National Council of Nonprofits, ASAE, Alliance of American Museums, Council for Christian Colleges and Universities, Easterseals, Evangelical Council for Financial Accountability, Independent Sector, and United Philanthropy Forum.

Please sign your State Association onto the letter as soon as possible. The official (first) deadline is close of business Wednesday, March 27.

Last Friday, President Trump issued the first veto of his presidency, invalidating the resolution Congress passed to overturn his February emergency declaration. The veto allows the president to continue with his plans to reallocate $3.6 billion in military construction funds toward building a wall along the U.S.-Mexico border. President Trump also plans to use other authorities to transfer $601 million from a Treasury Department drug forfeiture fund and $2.5 billion from a Defense Department drug prevention program, as well as the almost $1.4 billion Congress has already appropriated.

The resolution of disapproval, H.J. Res. 46, cleared the House and Senate with bipartisan support. Thirteen House Republicans and a dozen Senate Republicans supported the measure, with the move widely interpreted as a rebuke to the president’s immigration policies.

President Trump issued this national emergency declaration last month after signing H.J. Res. 31, the bill that ended the partial government shutdown of nine of 15 federal departments and dozens of agencies.

Caps on Sales Tax Exemptions for Nonprofits and Foundations

Efforts in Kentucky to correct mistakes in the 2018 sales tax law that imposed new taxes on charitable nonprofits and foundations initially included a $10,000 cap on nonprofit sales tax exemptions per year. After undergoing further revisions, an omnibus tax bill is awaiting the Governor’s signature that would fix the previous error, and exempt admission fees for events and items sold for fundraising purposes by all 501(c)(3) charitable nonprofits and foundations, which is an expansion from previous versions and current law, from sales tax. The Kentucky Nonprofit Network advocated in strong support of the language stating, “This legislative solution provides much-needed relief by ensuring that the funds donated to the commonwealth’s charities will stay with the charities — investing in their vital work to address critical issues and strengthen our communities.” In Washington State, nonprofits are working to pass legislation to prevent the expiration of their sales tax exemption for items valued under $12,000 that are won or purchased during a nonprofit fundraiser or event. Washington Nonprofits, the state association of nonprofits in the state, calls this a “significant step in the right direction” at a time when states should “take steps to support nonprofit fundraising.”

Legislation in Connecticut would create a pilot program to allow health and human services providers to retain revenue at the end of a contract and invest in innovation. A separate bill would reduce reporting requirements for nonprofit providers in the state and permit acceptance by a national accrediting body with more stringent requirements than the state to satisfy certain license and certificate renewals requirements. A measure before the District of Columbia Council would require the local government to reimburse nonprofits for their indirect costs for grants and contracts made with District funds. The DC proposal is modeled after the Maryland law on payment of nonprofit indirect costs passed last year.

Ohio and Tennessee have become the latest states to propose work requirements to the federal government in an application to qualify for Medicaid expansion. A similar requirement attached to Supplemental Nutrition Assistance Program, commonly referred to as food stamps, in the Buckeye State resulted in nearly 400,000 residents no longer receiving the benefits. Meanwhile, a recent report in the Volunteer State found that the proposal that would require most “able-bodied” adult participants in the health insurance program to get a job, take classes, or volunteer 20 hours each week would cost taxpayers in the state an estimated $19 million and force ten percent of current recipients out of the program.

The Trump Administration has previously approved work requirements for Kentucky and Arkansas, where tens of thousands of Medicaid recipients lost insurance because of the mandate. Wyoming lawmakers considered a bill this year to include work and volunteer requirements, but adjourned without passing it. The Wyoming Nonprofit Network opposed the measure, stating, “While it may appear to be providing free help to nonprofits, legislation like Senate File 144 is in reality an unfunded mandate with a heavy financial and administrative burden. … Wyoming nonprofits need to stand up to ensure mandatory volunteerism doesn’t interfere with mission advancement.”